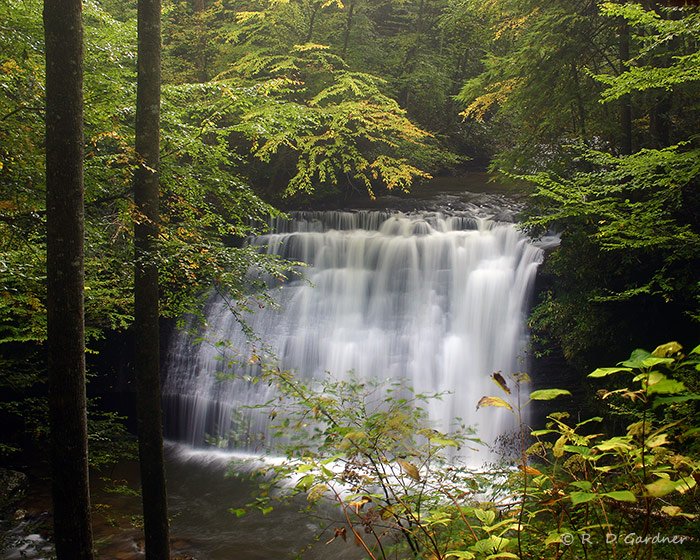 I've been to this waterfall twice. The photo above was taken on the first visit just after a good, long rain. In contrast, the photo at left was taken on my second visit September 6, 2007 during a dry spell (aka drought). I've based my rating on the higher flow visit.

There are two possible routes to this waterfall as I've detailed on the page for Upper Little Stoney Falls. If you go to the Upper Falls of the Little Stoney then it's a no brainer to go an extra 1/4 mile downstream to this one.

This waterfall also has a nearby geocache and is one of the eighteen in the Fallin' for Virginia Waterfalls series.

Other local waterfalls include the Upper Little Stoney Falls and Fall Creek Falls.

This is discussed in detail on the Upper Little Stoney Falls webpage. The middle falls are located about 1/4 mile downstream of the upper falls.

See the discussion on the Upper Little Stoney Falls webpage. Again, add or subtract 1/4 mile depending in whether your approach is downstream or upstream. The roundtrip number at the top left is based on Route #2 (parking near the Upper Falls).

The large photo above was taken at the trail overlook in 2006. You will have to work your tripod legs around the railing some but it is doable.

Another good location is at the base of the falls. A rough and steep trail goes to the base. It's short.

I played with various foreground elements at the base but never came up with anything that really satisfied me.

Use a polarizing filter to help with glare on the rocks and water.

My 2006 photos were taken with an overcast sky but for my latest trip it was sunny and about 10:00 am. While light wasn't directly hitting the waterfall (a good thing), I had some problems with lens glare/flare due to the Sun and had to use a combination of a lens hood and hand shading at times.

Due to its size the waterfall is best with slow shutter speeds, necessitating the use of a tripod.

Have your say about what you just read! Leave me a comment in the box below. 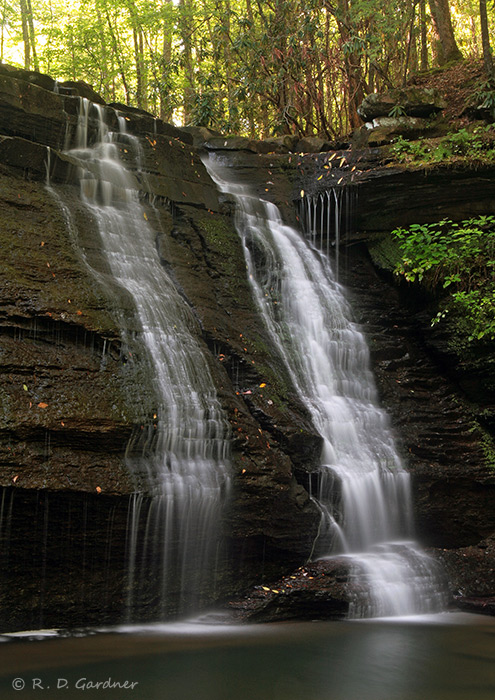 By Randy Gardner, All content Copyright© 2006-2016, All rights reserved.
No unauthorized reproduction is allowed without written permission.    Contact Us